Sorry so much for the dreamiest, most expectant fans of futurology, but in the not too distant tomorrow (two decades’ time) our planet will definitely not be chock-full of flying cars or any other puzzling, astonishing pieces of junk—At least that is what Julia Ortega puts forward in her recently released couple of novels: a world where people is still texting via WhatsApp through iPhones (Apple Inc. staff may easily relax: their business has a long life ahead); there is also a craze for the same current trendy clothing labels; in political terms, the Western world is still enduring Islamic terrorist attacks, and Israel is the same battleground as we all know it—there is only a significant political change: in Spain, the territory of Catalonia has finally gotten independence. But this is just the background of what the author wants to tell— 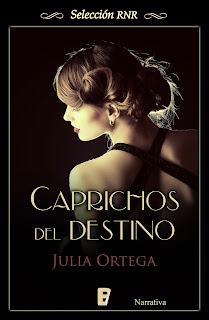 In her bilogy, Julia Ortega portrays an unconventional family saga in which women rule at best. Judith Ordóñez, the most rebellious of them all (the most individualistic as well), will face the risky, horrifying effects of free speech firsthand. Judith is a Spanish writer/journalist who settles in London due to the whims of fate. She leaves behind the grievous memories of an impossible love story with another woman, malleable Bárbara, who eventually marries a girlfriend of Judith’s, Michelle. In Caprichos del destino we find out that Michelle’s motives for this marriage are so sick and twisted that she embodies a striking combination between Amanda Woodward and Dr. Kimberly Shaw. That is to say, she is a total soap opera bitch.

In contrast to Judith, her daughter Gillian is a much smoother character, far away from the roar of wars and conflicts. Even her girlfriend and then stepsister Alex(andra) tends to be more spirited than her. 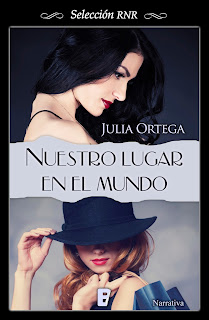 Despite what the first lines of Caprichos del destino may suggest, the truth is that this is not an overt political manifesto. The powerful voice of Judith, role model of feminist, self-sufficient, politically committed, self-made woman, will be silenced all of a sudden, and a dark menacing shadow hovers over the rest of the characters, particularly Gillian. Anyway, this situation will not be the main point in Ortega’s narration; she seems to be more interested in the sentimental side of the story. Thus, in Nuestro lugar en el mundo she focuses on the troublesome romance between Alex and Gillian.

First pally-wally schoolmates, later teen lovers—Alex and Gillian make the perfect lesbian match, getting through hard circumstances, such as family opposition (Josh, Gillian’s alcoholic, former budding film star father, disagrees in the most aggressive way), or the awkward situation of becoming stepsisters when Josh marries Alex’s mother—However, Alex and Gillian’s affective ties are quite weaker than imagined: Alex goes to New York for a wonderful job opportunity, and this forced separation opens this so-happy-so-far couple’s eyes to new horizons—

On one hand, Gillian feels tempted by Sam—a male colleague teacher engaged to Olimpia, a bossy hag—, who falls for her the very first moment that he looks at Gill in her astonishing Prada costume. On the other hand, Alex wins the heart of Saffron Adams, an American pop star whose sexual identity has never been revealed to the public—not even to her scary, conservative mother, who suspiciously resembles any of those arrogant Belles of the South fanning themselves proudly (how else?) in Margaret Mitchell’s Gone with the Wind. Out of sight, out of mind—so Sam and Gill unexpectedly get pregnant, while Alex experiences a little hell in her life because of Saffron’s bad-influence friends—though happily recovers from an almost fatal overdose in the end.

Despite disregard, treachery, and deception, Alex and Gill finally make peace, and Alex expresses her wish to see Sam and Gill’s daughter Maerwyn grow up. After all, she is the baby’s auntie.

And if you are missing the ineludible presence in any proper chick lit piece (i.e., the heroine’s gay friend)—then let me introduce Saffron’s friends Eric and Rowan; as charming as pleasant, with a pinch of superficiality, they accurately personify the stereotypical gay couple who is there in the bad times to comfort.

As narrative style is concerned, Ortega’s speech is interestingly delivered: in each chapter, one of the characters tells the story from their viewpoint. This device is especially hilarious when it is Gill’s turn; her debates with her own conscience are foolishly insane.

Feminism, lesbianism, committed literature, politics, family troubles, romance, sex, alcoholism, notoriety, drug abuse, assault, pregnancy, terrorism, situation comedy, soapy plots—each and every single issue, significant or small talk, is present in this funny mixed-up two-volume patchwork set in a future where the woman is the boss—and all the men are merely supporting players.
Posted by Alejandro Gutiérrez at 4:10 AM